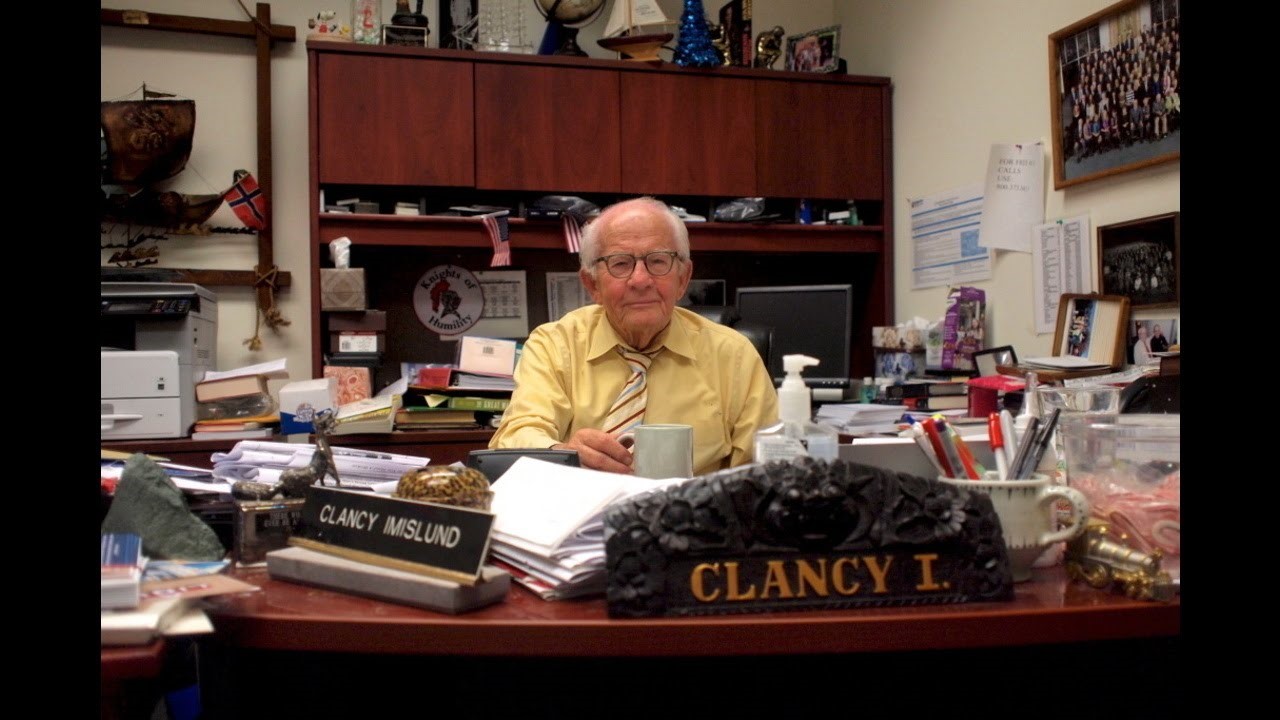 “The purpose of AA is to do slowly,

what alcohol used to do quickly;

to change the alcoholic’s perception of reality.”

Unquestionably, Clancy was one of the most colourful characters in Alcoholics Anonymous. At the time of his death, he had 61 years of continuous sobriety. Founder of the Pacific AA group in LA, it has helped 1000’s alcoholics get sober.

Clancy was a second world war veteran. After the war, his drinking escalated and he ended up a homeless drunk. Following an almost successful suicide attempt, he was admitted to the Florida state insane asylum.

Eventually, Clancy got sober on 10/31/1958. In his early days of sobriety, he lived in an abandoned car. It was dumped in the parking lot of his local AA clubhouse.  He certainly didn’t have far to go to get to his AA homegroup!

Clancy gained fame and notoriety when he became an AA circuit speaker. He was considered one of the best and funniest public speakers in Alcoholics Anonymous. Although often hilarious, Clancy also carried a very poignant message.

It was a message delivered in deadly earnest. As strange as this may sound to a layperson, Clancy believed alcoholism to be an all-consuming mental illness. This he believed was true, whether the alcoholic was drinking or not! In his understanding of the alcoholic illness, it went way beyond a physical addiction to alcohol.

Besides his popularity as a circuit speaker, Clancy also sponsored a large number of men through the twelve steps. Outside of AA, he worked with LA’s homeless drunks at the downtown LA Midnight Mission. Once himself a client, in 1974 he was made the managing director.

The Midnight Mission is a human services organization in downtown Los Angeles‘ Skid Row. It was founded in 1914 as a secular not for profit organization. The organization provides food, drug and alcohol recovery services and “safe sleep” programs. It also offers educational training, a mobile kitchen, and family housing. The emphasis is on developing self-sufficiency.

In 1963, the Midnight Mission conducted a survey of people living in Skid Row. It concluded that alcoholism was a significant contributor to their life situation. In 1974, they named recovered alcoholic and popular A.A. speaker Clancy Imislund as managing director. This was a role he undertook for many decades.

My early years of recovery

I arrived in AA on the 15th of May 1984. After almost 20 years of drinking, I had enough. I was sick and tired of being sick and tired. There was a burning desire to get sober and make something of my life.

I loved AA from my first meeting. In childhood, I was someone who grew up in foster care. Overnight, AA became the family I never had. I went to meetings every day. Sometimes, I went to two even three meetings a day.

The identification I received with my fellow alcoholics was priceless. At last, I belonged somewhere! I saw people getting well and I wanted what they had. When the alcoholic fog began to clear, I heard two things at meetings that dampened my enthusiasm for AA.

The Disease concept of alcoholism

The second thing I heard was that alcoholism is an illness. “What a load of nonsense,” I thought. In my mind, it was a clever idea thought up by the founders. The ‘disease concept’ idea was designed to take the shame and moral stigma out of being a drunk. As unwell as I was, I thought I was being honest by believing that alcoholism was a moral issue.

I saw myself as an inebriate that had achieved nothing in life. My resume after twenty years of drinking had been frequent admissions to psyche wards. I had been to prison; as well as homeless on the streets of London.

When Bill Wilson wrote the Big Book, he kept referring to alcoholism as an illness. Bill uses the expression “Illness” 16 times in The Big Book and the twelve steps and twelve traditions. The expression “disease” is used twice.

Big Book Chapter Two ‘There Is A Solution’, p.18

I wasn’t ill; I was just addicted to alcohol! In meetings, I was introduced to the well-known AA slogan, ‘Keep it simple.’ My interpretation of this was quite simply; – ‘don’t drink and go to meetings.’ That’s all that I was prepared to do.

God, sponsorship and steps were not for me. And so my sober journey began on May 15th 1984. Boy, – was I in for a very rude awakening when I started to experience life without alcohol!

My mental and emotional life in sobriety was a roller coaster of racing and uncontrollable thoughts. I was tormented by painful memories and overwhelming emotions. At times I wondered if I was mad. The first of AA’s twelve steps invites us to admit two things.

Firstly, that “we were powerless over alcohol”.  Secondly, “that our lives had become unmanageable” In those early years of recovery, it would be more accurate to say that as a dry drunk, my life was not only unmanageable, it was unbearable!

Was therapy the solution?

I ended up believing that my suffering in sobriety was due to a troubled childhood. It seemed logical to go into therapy to try and resolve those issues. I stayed in therapy for over 10 years. During that time, I went to meetings almost every day.

Despite counselling and psychotherapy, I was still unable to stay sober. My mental and emotional life got worse and worse. Suicide began to look like a good idea. Was it the fault of therapy? No! I had some very professional and skilled therapists over the years.

It was something else. I didn’t really know what it was. I entered into therapy with the best will in the world. Many thousands of pounds later, I got to the point, where sobriety had become intolerable.

My first introduction to Clancy

Despite being a serial relapser, I kept attending AA. After several long and difficult years, someone gave me a tape of Clancy to listen to. It was a recording of him speaking at a convention.

Clancy was the first person who offered a tangible explanation for my suffering as a dry drunk. His message blew me away! He described alcoholism as a ‘disease of perception.’ What did this mean? Let him tell you himself:

One of the things he said really got my attention. As a dry drunk in AA what he said hit me hard. He shared that for alcoholics, drinking wasn’t really the problem. It was the solution!

It was the only thing that could medicate the alcoholic’s extreme and oversensitive reaction to life. Alcohol would turn down the volume of the crazy thinking that in AA is associated with untreated alcoholism.

The disease of perception

In his talks, Clancy described alcoholism as a ‘disease of perception.’ After listening carefully, things started to make sense. Maybe I really was suffering from an illness? I couldn’t deny that there was something very wrong with the way my mind worked. I always overreacted to normal, everyday events.

When Clancy shared how he used to react to life, he could just as well be describing me. Since childhood, I had always been very oversensitive. Alcohol was the only medicine in the world that made life more tolerable.

“If alcohol was my problem, once I got sober, there would be no need for AA”

Alcohol was never my problem, it was my solution! My problem was exactly as Clancy defines it; the ‘disease of perception.’

A distorted prism of reality

As an alcoholic, my perceptions of reality were always played through a distorted prism. Drunk or sober, I experienced life through the warped lens of fear, resentment, self-pity and blame. Chronic insecurity was at the heart of my anxiety.

I had always been self-centred enough to think that everything negative that happened, was somehow personal. Why does this keep happening to me!? It was the classic victim belief system that is so common to alcoholics.

I had to find a way to stop reacting to life this way. Otherwise, staying sober was impossible.

“We were in a position where life was becoming impossible. If we had passed into the region from which there is no return through human aid, we had but two alternatives: One was to go on to the bitter end, blotting out the consciousness of our intolerable situation as best we could; and the other, to accept spiritual help”

Big Book Chapter two ‘There Is A Solution’, p.25

What is spiritual help for an agnostic?

Spiritual help for an agnostic of my type has been to go through the twelve steps. They only worked with an agnostic-friendly sponsor. It has been a journey to overcome the “Selfishness and self-centeredness” (Bill W Big Book page 62) of the alcoholic illness. This is turning out to be a lifelong process. Through AA’s twelve steps, I am gradually learning what truly makes me happy. Amazingly, it is a life of “Love and service” to others. (Dr Bob’s farewell talk – July 30, 1950)

I fully acknowledge that I am “not cured of alcoholism.” Now that I’m not drinking, I prefer to call it, the disease of perception. What I have is a “daily reprieve contingent on the maintenance of our” (my) “spiritual condition” (Big Book Chapter six “Into action” p. 85)

When I remember this and practice the AA suggestions, Clancy’s ‘disease of perception’ is arrested. ‘AA has indeed done for me slowly what alcohol used to do quickly.’