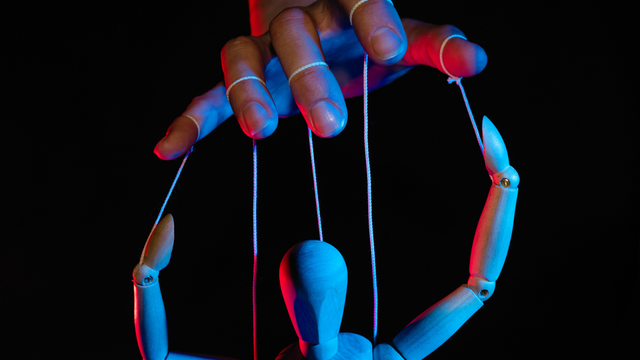 What are the control issues that sometimes drive alcoholics? Are they different from the ones that affect more balanced people? In all likelihood, they are similar. There appears to be only one significant difference. Alcoholics are driven by “self-will.” (BB p.62) Any attempt at successfully exerting control over their circumstances and other people is just an illusion. What makes us different from regular people is a shocking truth that is not always easy to accept.

Step one: A total loss of control

Alcoholics are very different animals from normal non-alcoholic people. Here are the two shocking differences that place us apart from regular folk.

1) “We admitted we were powerless over alcohol” –

2) “That our lives had become unmanageable”.

These two ideas presented in step one imply a loss of control. Firstly, alcoholics have lost control over their drinking. Alcohol controls them and not the other way around. They are only able to stop when they reach out for help. This help is seen in AA as a power greater than themselves. Initially, that greater power is the AA group itself. (Group Of Drunks – acronym for GOD)

A second and even more shocking truth begins to creep in after they get sober. Leaving aside their powerlessness over alcohol, they begin to realize another startling fact. The more they try to exert control over their lives as dry alcoholics, the less control they seem to have.

Driven by a self-centred determination to keep getting their own way, they seem to create nothing but resentment, confusion and misunderstanding.

After years of drinking and a self-destructive lifestyle, the ego of the alcoholic has become maladapted. Bill W, the author of the AA Big Book, has called this “self-will run riot” He presents it as a core symptom of the alcoholic dis-ease.

“The alcoholic is an extreme example of self-will run riot, though he usually doesn’t think so” (BB How It Works, p.62)

Is there a solution?

Bill W’s prescription for surrendering the illusion of control

In the Big Book, Bill W offers us some powerful suggestions to disarm the maladapted ego. In the reading, Bill alludes to the fact that our addiction to control is a central symptom of untreated alcoholism. This appears to apply to every area of our lives, whether we are drinking or not!

This is the strange feature of alcoholism. The ego of the alcoholic has become so maladapted that their very best ideas frequently end in failure. This is how the AA literature describes it: “Some of us have tried to hold onto our old ideas and the result was nil until we let go absolutely” (BB p. 58) Their capacity to assert anything worthwhile and creative, has been impaired by years of alcohol abuse. For many of us, this appears to be true whether we are drinking or not

One of my sponsors showed me a passage from the Big Book. He suggested I read it every morning. It was the perfect prescription to treat the dry drunk that I had been on for many years in recovery.

The reading starts with “On awakening………” It’s on page 86 in Chapter six of the Big Book. The suggested reading runs till the end of the chapter.

“We relax and take it easy, we don’t struggle”

“We ask especially for freedom from self-will”

“We constantly remind ourselves we are no longer running the show”

These three powerful suggestions have been instrumental in helping me recover from a dry drunk. They helped me begin enjoying and not enduring sobriety. At the very core of my untreated alcoholism was an addiction to control. I had a compulsive/obsessive need to be in control of people, places and things.

It went even further than that. In my alcoholic head, I was trying to exert control over the past and the future. I believed that I could change the past and future just by obsessively thinking about them. When I realized that this is what I was doing, I surrendered even more to the suggestions I was getting from a sponsor

These fear-driven control issues succeeded in creating nothing but conflict and resentment. Both internal and external conflict. In personal relationships, instead of finding security, my control issues just drove people further away. Untreated alcoholism was a lonely business.

The hidden face of alcoholism

It was of course impossible to find happiness as long as I was trying to be in control. My mission in life was to always try and fix myself from the outside in. I rejected the idea that ‘recovery is an inside job.’ A belief in God to fill the inner void may work for some, but I knew it wouldn’t work for me.

Frequent references to God in the twelve steps were all some kind of religious nonsense. I became convinced, that you had to believe in God to recover from alcoholism. Since God is mentioned in six of the twelve steps, it was understandable for an agnostic to feel daunted by the twelve steps.

I was caught in the revolving door of relapse for many years. Some of them were life-threatening. I was genuinely frightened that I wasn’t going to make it. As a direct result of my addiction to control, it began to seem that my chances of getting well were “less than average.” (BB p. 58) It gradually began to dawn on me that any attempts to be in control would always end in misery and failure.

Then I had what I have come to call my first non-God-centred spiritual awakening. After more than a decade of relapse in AA, my ego finally collapsed. On that day, I surrendered and received the Gift Of Desperation. (Acronym for GOD) It became very clear that my very best ideas to keep running the show of my life would continue to end in relapse. I was all out of options. The only thing I hadn’t done was ask for help from an AA sponsor.

An admission of abject hopelessness* made me teachable. Through no personal virtue, the Gift Of Desperation made me willing to follow Good Orderly Direction. (2 helpful acronyms for GOD) This was my second non-God-centred spiritual awakening.

* ”The more hopeless he feels, the better. He will be more likely to follow your suggestions” (BB p.94)

The twelve steps helped me to begin resolving the issues, that I had always avoided facing. I discovered that I was a deeply conflicted person. This inner duality was the cause of my suffering both drunk and sober. It condemned me to keep picking up the first drink again and again.

I gradually warmed to AA’s idea that alcoholism is an illness. Psychological talk therapies didn’t keep me sober. I gradually learned in AA why therapy hadn’t worked. It came as a shock! I was trying to fix a spiritual problem with a psychological solution. Eventually, I warmed to Bill’s idea of alcoholism being a “spiritual malady” (BB p.64)

The innumerable fears that drove my alcoholic ego were “the chief activator of my defects”. (12&12 p.76) They made life completely unmanageable. Through surrendering to the work of the twelve steps, I was able to begin naming these shortcomings. With the help of humility offered in step 7, I was gradually able to do something about them.

Trying to exert control over defects of character

Some of these shortcomings were not easy to overcome. I was as addicted to them as I was to alcohol and drugs. My addition to control created nothing but trouble. Instead of surrendering daily, I tried to exert control over my defects of character. This made them even worse. My control issues were also very apparent in relationships. Until I accepted the second half of step one, these relationships were doomed.

With the help of my sponsor, I realized that I was a very controlling person. Ironically, I avoided control freaks like the plague, yet I was exactly the same. All my life, I thought I was such a nice and easygoing guy. Step work revealed that I could be controlling, overbearing and manipulative. Like many of us alcoholics, I liked to get my own way.

The AA literature revealed the root cause of my control issues.

Bill W describes it perfectly in Step Seven of the twelve steps and twelve traditions.

On page 76, Bill declares that the chief activator of my control issues is FEAR. I was amazed at how accurate he was in pinpointing the core of my problems:

A) “fear of losing something we already possessed”

B) or (the fear) “of getting something we demanded.”

It was impossible to stay sober and find any serenity as long as I was driven by these two fears. Chronic insecurity drove the demands and expectations I had of myself and others. They turned me into an angry, impatient and intolerant dry alcoholic.

Letting go of the addiction to control

In my search for comfortable sobriety, I had to admit a fundamental truth. Not only was I powerless over alcohol and drugs, but I was also powerless over people, places and things. My peace of mind became dependent on reducing the demands and expectations I had of other people. I had to begin letting them go. My victim belief system always managed to convince me that life owed me!

The solution offered by Bill

This has been the solution to overcoming my control issues. Step one reminds me of my personal powerlessness. Acknowledging this helps me to surrender and just go with the natural and spontaneous flow of life. The addiction to control had to go; if only a little bit at a time. How successful can I possibly be in creating a sober and happy life if I don’t let go of the illusion of control?