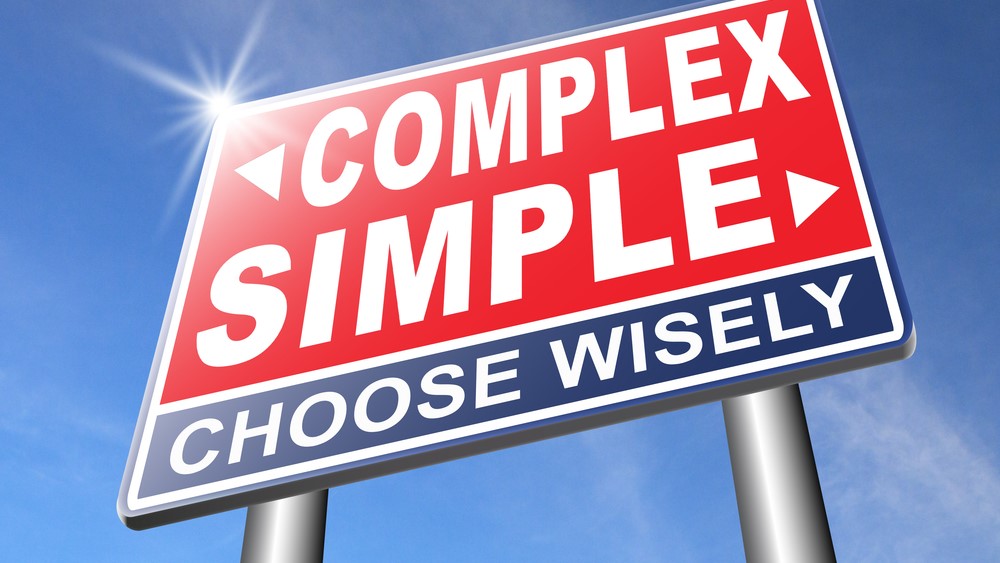 The slogan “keep it simple” is displayed at AA meetings across the world. It certainly sounds like simple advice. In terms of recovery from alcoholism, what does it actually mean? Keep what simple? What is the “it” in AA that alcoholics are supposed to keep simple? When you think about it, the meaning of “keep it simple” is not as straightforward as it sounds. Perhaps we need to go back to AA’s grassroots to get a more understandable definition of this popular AA slogan

A good place to start is with Dr Bob, AA’s co-founder. Three and a half months before he passed away, he was invited to say a few words at the first international AA convention in Cleveland, Ohio. It became known as Dr Bob’s farewell talk.

… I get a big thrill out of looking over a vast sea of faces like this with a feeling that possibly some small thing I did a number of years ago played an infinitely small part in making this meeting possible. I also get quite a thrill when I think that we all had the same problem. We all did the same things. We all get the same results in proportion to our zeal and enthusiasm and stick-to-itiveness. If you will pardon the injection of a personal note at this time, let me say that I have been in bed five of the last seven months and my strength hasn’t returned as I would like, so my remarks of necessity will be very brief.

There are two or three things that flashed into my mind on which it would be fitting to lay a little emphasis.  One is the simplicity of our program. Let’s not louse it all up with Freudian complexes and things that are interesting to the scientific mind, but have very little to do with our actual A.A. work. Our Twelve Steps, when simmered down to the last, resolve themselves into the words “love” and “service.” We understand what love is, and we understand what service is. So let’s bear those two things in mind.

Let us also remember to guard that erring member the tongue, and if we must use it, let’s use it with kindness and consideration, and tolerance.

And one more thing: None of us would be here today if somebody hadn’t taken time to explain things to us, to give us a little pat on the back, to take us to a meeting or two, to do numerous little kind and thoughtful acts on our behalf. So let us never get such a degree of smug complacency that we’re not willing to extend, or attempt to extend, to our less fortunate brothers that help which has been so beneficial to us.

Thank you very much.”

Reprinted with the permission of Alcoholics Anonymous

The whole AA program is open to personal interpretation as is of course Dr Bob’s farewell talk. It has a special meaning for me personally and had a profound effect on my recovery from alcoholism. In his last words to AA, he encapsulated the purpose of the twelve steps. His brief remarks offer us the pure undiluted message of Alcoholics Anonymous.

Firstly, a reminder to keep it simple:

“One is the simplicity of our program.”

To understand what Dr Bob meant by the simplicity of the program we need to go to the second quote that he offers us. After reading his farewell message several times, I was left with no doubt in which direction I was supposed to be heading. Moreover, page after page, the AA literature confirms Dr. Bob’s words. “Love and Service” to others is the therapy for the successful rehabilitation of alcoholics.

“Our Twelve Steps, when simmered down to the last, resolve themselves into the words “love” and “service.”

Simple, if not always easy!

Not keeping it simple

I came to understand another important thing from Dr Bob’s talk. The twelve steps were the way forward to put his farewell message into practice. I became convinced of the power of the spiritual, as opposed to, the psychological solution. I can say this without reservation as an enquiring agnostic.

Mine was always an analytical way of thinking. As an alcoholic, this was why I made life such hard going. I could keep nothing simple. In terms of treating the illness, having an overactive mind has proved to be a curse more than a blessing. I always insisted on trying to get an in-depth understanding of the issues that made life so unmanageable. I was like a dog with a bone in trying to get the perfect answers in my quest to find happiness.

Initially, I was sold on the idea that psychotherapy was a much more effective treatment option. I was in for a big shock. Leaning on modern psychology I was convinced that success lay in analyzing my issues. I believed that this was how I would resolve them. Remaining miserable, I just kept picking up the first drink.

“But the actual or potential alcoholic, with hardly an exception, will be absolutely unable to stop drinking on the basis of self-knowledge”

I know that therapy is a useful and healing resource for many people. However, I was highly compulsive and obsessive in the way that my mind worked. It took a long time but it gradually dawned on me that focusing on problems only made them worse. I needed practical solutions that worked. These were offered through the helpful, daily suggestions of an AA sponsor. They were designed to reduce overthinking. It was through warped thinking, that the alcoholic illness continued to kick my butt!

“Therefore, the main problem of the alcoholic centres in his mind rather than in his body”

Big Book “There is a solution” p.33 First edition

The simple suggestions taught me how to live within the solution and not be bogged down in the problem. Alcoholic thinking seemed only to reinforce darkness and negativity. Dr Bob offered yet another illuminating idea about recovery. It was exactly what I needed to hear. He convinced me beyond any shadow of a doubt that analysis always led to paralysis. For an alcoholic of my type, therapy turned out to be the exact opposite of keeping it simple.

“Let’s not louse it all up with Freudian complexes and things that are interesting to the scientific mind, but have very little to do with our actual A.A. work.”

New ideas from members at meetings

“We came for our drinking and stayed for our thinking”

The Big Book confirmed that too much thinking for the alcoholic was a dangerous habit.

“Now about health: A body badly burned by alcohol does not often recover overnight nor do twisted thinking and depression vanish in a twinkling”

The reading then goes on to say:

So what is a spiritual mode of living for an alcoholic that doesn’t believe in God?

Once again, Dr Bob answers this question in such a way that it offers a tangible solution for atheists, agnostics, and freethinkers in AA. Although a belief in God is helpful to many, his powerful words do not mention a belief in God. What he does say is this:

“Our Twelve Steps, when simmered down to the last, resolve themselves into the words “love” and “service.”

I began to be liberated from “twisted thinking” (BB p.146 First edition) when I surrendered and became teachable. Gradually, I realized that “running the show” of my life on self-will, (BB “Into action” p.100 First edition) would guarantee that I would remain “restless, irritable and discontented.” (BB “The doctor’s opinion” p.5 First edition) To stop running the show of my life involved an unconditional surrender to step one. Moreover, the daily practice of honesty, open-mindedness, and willingness (BB p. 568 “Spiritual Appendix 2” 4th edition) became a concrete path towards the humility offered in step 7.

What was Dr Bob alluding to when he remarked about the simplicity of the program? Is it as simple as the practice of love and service to others?

For an alcoholic with a complicated analytical mind like mine, love and service to others are not such difficult concepts to grasp. It may not always be easy but it doesn’t get simpler than that!

How was I to begin the journey of making Dr Bob’s two powerful principles a daily practice? It took a long time to learn that recovery is all about action, action, and more action; certainly not thinking, thinking and more thinking.

Learning how to stop listening to Radio Andy through love and service to others is the action that is setting me free.