One Day at a time 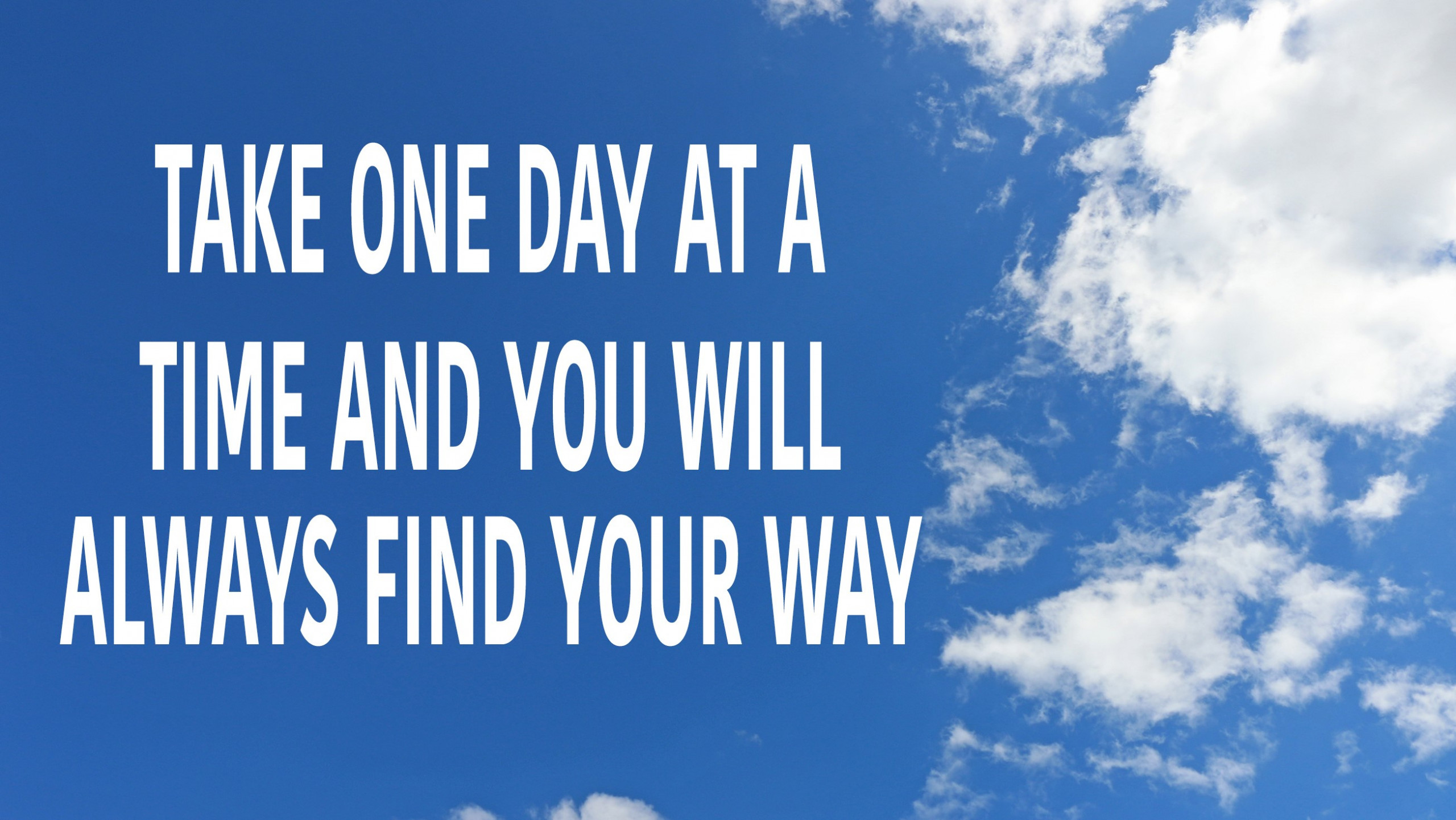 How often do we hear the phrase ‘One day at a time’? It’s particularly relevant to AA and most 12-step fellowships. This slogan has been popularized in AA since its inception in 1935.

Google offers an explanation of where and how this slogan came into being. It came as no surprise, that the first answer offered was attributed to AA.

“Although not taken from one of the 12 steps, Alcoholics Anonymous and their “Big Book” are attributed to the phrase, “live one day at a time”. It derives from the original concept of AA which is that each individual each has 24 hours of sobriety.”

The AA plan for living sober

For a newcomer, sobriety becomes achievable when taken in 24-hour increments. The slogan ‘one day at a time’ takes the anxiety out of the idea of never drinking again. The AA literature tells us that we will never be cured. Even after completing the first nine steps, we are told that all recovering alcoholics can ever expect is a daily reprieve from alcohol addiction.

“We are not cured of alcoholism, what we really have is a daily reprieve”

Upon getting sober, newcomers soon discover that AA views alcoholism as a threefold illness. It becomes apparent that not drinking won’t be enough to get well. To achieve long-term and happy sobriety, they will have to address the illness at three levels. The AA literature presents alcoholism as an illness that afflicts the sufferer physically, mentally, and spiritually.

“This self-insurance has resulted in the restoration of physical, mental and spiritual health and self-respect to hundreds of men and women who would be hopelessly down and out without its unique but effective therapy”

For alcoholics in early sobriety, not picking up the first drink is the only thing that most newcomers are interested in. But to remain happily sober, they will need to deal with the “causes and conditions” (BB “How it works” p.64) of their destructive drinking.

“By now, though, the chances are that he has become convinced that he has more problems than alcohol……….”

Staying sober for AAs that don’t believe in God

Thankfully, atheists, agnostics, and freethinkers in AA discover that the spiritual awakening mentioned in step twelve is by no means dependent on a God awakening. A gradual surrender of the ego, (self-will) with the help of the steps leads to humility. The journey from the ego to humility can be described as a non-God-centered spiritual awakening. With the help of the program, alcoholics discover that “self-will run riot” (BB “How it works” p.62) has been the primary cause of their failure in life.

Self-will is driven by the maladapted alcoholic ego. It is the cause of much suffering for alcoholics and those close to them. The challenge of “ego deflation” (12 steps and 12 traditions page 55, ‘step five’) is not an overnight matter. We can successfully overcome our difficulties but only when we take sobriety “one day at a time.” As an agnostic, recovery has required getting honest and internalizing all the other ideas presented in the first 164 pages of the Big Book. I simply used AA itself and the suggestions of a sponsor who was willing to work with someone who didn’t believe in God

“You can if you wish make AA itself your ‘higher power.’

A simple program for complicated people

It has been frequently said, that AA is a simple program for complicated people. I saw myself as a complicated person with highly complex problems. People kept telling me, “Keep it simple!” I took this to mean don’t drink and go to meetings. I was so full of prejudice towards the ‘God’ word, that at the time, that’s all that I was prepared to do. This resulted in more than a decade of relapse.

Finally, when the ego collapsed, I had to admit that my very best thinking condemned me to keep picking up the first drink. Not through any personal virtue, I became teachable. ‘One day at a time,’ taking suggestions from a sponsor became the “easier softer way.” (BB “How it works” p.58)

Armed with the Gift Of Desperation, I began to follow Good Orderly Direction. These acronyms for God became powers greater than me as well as my AA buddies at meetings (Group Of Drunks). These powers worked then and they still work today. To treat the alcoholic illness, I surrender my self-will daily and remain teachable.

As I journeyed through the steps, I discovered new and liberating aspects of why I made life such hard going. I was never able to keep my life in today. The slogan one day at a time was an impossible concept to grasp. An inability to live here and now resulted in one relapse after another.

Steps four and five revealed that I was a slave to a distorted perception of reality. Resentment, bitterness, guilt, and remorse about the past, made it impossible to live today. Projecting anxiously into the future; made life completely unmanageable. I dreaded the future and ruminated obsessively about the new calamities that would soon be landing on my doorstep.

Knowing that I was an agnostic, my first sponsor told me that step three was just a decision to go on with the first nine steps. Steps 4 through 9 helped me to let go of the wreckage of the past. I also realized how dishonest it was to worry about the future. I had to resign from the fortune-telling business. Things never turned out the way that I thought they would anyway. This left me with today. I began to grasp how liberating it could be to live one day at a time.

After completing the amends required in step nine, I realized that it was the maladapted alcoholic ego that prevented me from living one day at a time. The dark and negative ego was always projecting into the future or blaming others in the past for real or imagined harm. I was very committed to the victim belief system. As an agnostic, freedom came when I began to discover the healing power of humility offered in the seventh step.

I saw on paper in black and white, how wrong I had been about everything. The humility offered in step seven helped. I discovered that ego and humility cannot co-exist.

“It is better to be wrong and happy, than right and miserable” (Popular AA saying)

The self-honesty I learned by going through the steps has taught me to recognize the negative inner dialogue of the ego as the bullshit that it actually is. I am learning to trust the natural and spontaneous flow of life. If I remain honest and keep doing the right things, sooner or later, the right things begin to come into my life. AA’s way of living turns out to be a much better idea than the very best of my “old ideas” (BB “How it works” p.58)

The power of now

As I progressed through the steps, I began to experience a connection with others. This was such a gift compared to the loneliness and isolation of untreated alcoholism. I am discovering a life of peace happiness and joy. I read book after book about modern spirituality. Then I discovered “The power of now” by Eckhart Tolle.

This amazing book taught me how to connect with true spiritual power. It was no longer enough to live one day at a time. To spiritualize recovery from alcoholism, I had to learn how to live one moment at a time. As someone who doesn’t believe in the idea of a monotheistic God, I am happy to call living in the power of now, a non-God-centered spiritual awakening.

Two powerful new ideas from “The power of now”

Ekhart Tolle makes two statements that I learned to apply to recovery.

The present moment begins to dissolve feelings of helplessness and powerlessness. It neutralizes ‘the victim belief system’ which condemned me to drink. This very self-defeating belief was already firmly in place long before I started drinking. The twelve steps have led me to the freedom that comes from living “one moment at a time.’ Do you think that living consciously in the power of now can be described as a transcendent non-God-centered spiritual awakening?