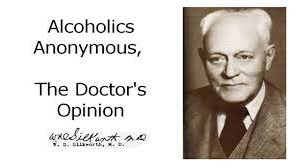 I went to my first AA meeting in May 1984. It took several weeks for the alcoholic fog to clear. I was happy to be in AA and to have found like-minded people. I felt an immediate sense of belonging amongst fellow alcoholics.

However, I didn’t much like AA’s basic recovery text, known as the Big Book. I found its generally old-fashioned use of English off putting; also, seeing words like “thee” and “thou” in the text was way too Biblical for my taste. It stirred up all my old prejudice about religion.

My dislike of the AA literature was reinforced by frequent references to God and a Higher Power. I saw that a doctor’s opinion appeared as an introduction to the Big Book’s plan of recovery. Given the religious nature of the text that followed it, it seemed oddly out of place, and I didn’t bother to even read it.

Several years into my recovery, I eventually learned who Dr. Silkworth was and how he had become familiar with the early work of the founders of AA. He was the chief physician at a prominent hospital in NY. The hospital specialized in the treatment of addiction to alcohol and drugs. When asked to write a letter of support regarding AA’s work in sobering up alcoholics; he made this statement:

How Dr Silkworth saw the rehabilitation of alcoholics

“We doctors have realized for a long time that some form of moral psychology was of urgent importance to alcoholics, but its application presented difficulties beyond our conception. What with our ultra-modern standards, our scientific approach to everything, we are perhaps not well equipped to apply the powers of good that lie outside our synthetic knowledge” *

In my early years in AA, I had little interest in the Big Book. Instead, I went into therapy and stayed sober on meetings alone. In my mind, therapy was a much more appropriate intervention. I had serious issues from my childhood. I was convinced that only professionally trained therapists were competent enough to help me.

After many years of relapse in AA, I eventually had to reconsider my attitude to the program and the literature. Ten years of therapy, in addition to attending regular AA meetings, hadn’t worked to keep me sober. I was unlikely to survive another relapse.

“We saw that we had to reconsider or die”

I arrived at the ego-deflating admission that I couldn’t stay sober doing it my way. My choice had been to limit my recovery in AA by just going to meetings. This clearly wasn’t enough to help me to stay sober and get well.

I received the Gift Of Desperation (an acronym for GOD) and became teachable for the first time in my life. I honestly admitted the truth of the following statement from the chapter on Step One in the 12&12:

……….”Then, and only then, do we become as open-minded to conviction and willing to listen as the dying can be”

From that day forward, AA itself, my sponsor’s suggestions and becoming teachable all became powers greater than me. My sponsor’s initial suggestion was that I read the first 164 pages of the Big Book.

Whenever I got to the God word, I simply replaced it with the power of AA. I was assured that I would find the solutions to my alcoholism within its pages whether I was a believer or an unbeliever.

Through no personal virtue of my own, I gradually became well acquainted with the literature. To my great surprise, I began to see myself on every page. I realized that Dr Silkworth had a deep understanding of the immense and destructive power of the alcoholic illness.

The Doctor’s Opinion: a mine of information

It’s amazing how open I became to new information once I received the Gift Of Desperation. In my early years in AA, I often used to hear people say at meetings that “there are no ‘musts’ in AA”. The Twelve Steps are offered only as suggestions.

“Here are steps we took which are ‘suggested’ as a program of recovery.”*

For a serial relapser like me, the idea that I could get by while refusing to take any suggestions set me on a path that could only result in continued relapse. My sponsor pointed out that the word “must” is mentioned six times in The Doctor’s Opinion.

He also pointed me to the following sentence from Dr. Silkworth’s opinion:

“…the only effort necessary being that required to follow a few simple rules.” *

This helped me to stop paying lip service to the program. I began taking the suggestions more seriously. If I wanted to survive, the good doctor declares that there is a requirement to get well and recreate my life.

Are there no rules in AA? Certainly, if, like me, you are prepared to gamble with your life.

“…..unless this person can experience an entire psychic change, there is very little hope for his recovery.”*

What did Dr. Silkworth mean by an entire psychic change? Was it some kind of religious conversion? Thankfully, my sponsor reassured me that “an entire psychic change” does not involve any requirement to believe in God. As an agnostic, I found this new awareness extremely liberating. I was freed from the shackles of my former prejudice.

My sponsor defined the entire psychic change that could transform my life as an agnostic alcoholic by reference to the following sources:

“Selfishness – self-centeredness! That we think is the root of our troubles.”

This is a short excerpt from his talk:

“Our 12 Steps, when simmered down to the last, resolve themselves into the words love and service. We understand what love is and we understand what service is. So let’s bear those two things in mind.”

Reprinted with permission of Alcoholics Anonymous

Doctor Bob suggested that love and service were the polar opposites of selfishness and self-centeredness. Any alcoholic that has undergone this radical change in feeling and outlook has unquestionably undergone an entire psychic change.

In effect, my sponsor was steering me towards the realization that any alcoholic who has worked the 12 Steps fearlessly and thoroughly and is continuing to pursue spiritual growth through the maintenance steps will, by definition, have satisfied the conditions ‘required’ for the psychic change prescribed by Dr. Silkworth.

“They are restless, irritable and discontented unless they can again experience the sense of ease and comfort which comes at once by taking a few drinks.”*

After being on a 13-year dry drunk in AA, it was evident that I was restless, irritable and discontented most of the time. This was my experience with or without a drink.

Why did my abstinence from alcohol not relieve these symptoms? Was my alcoholism really an illness that persisted in sobriety? In short, was my addiction to alcohol only a symptom of the alcoholic illness?

“Once a psychic change has occurred, the very same person who seemed doomed, who had so many problems he despaired of ever solving them, suddenly finds himself easily able to control his desire for alcohol.*

I eventually came to understand that it was my maladapted alcoholic ego that condemned me to be restless, irritable and discontented. Release from this condition requires a daily surrender of my ego-driven will and diligent work on the steps.

By learning to live like this, I found freedom from anger, misery, and anxiety. Before I underwent this ego deflation, through application to step work, I merely endured rather than enjoyed my sobriety.

When I remind myself that I am “no longer running the show*” (Big Book, Chapter Six, “Into Action”, p.100, First Edition), I am released from the pain of untreated alcoholism. The greater my surrender and my willingness to remain teachable, the more I begin to glimpse the priceless gift of humility referred to in Step Seven.

“It brought a measure of humility, which we soon discovered was a healer of pain”

The false to the true

As an untreated alcoholic, I was undoubtedly both mentally and emotionally unstable. My dishonest way of seeing things would continuously warp my perception and fill me with fear, resentment and suspicion. This distorted perception also poisoned the way that I saw my past, present and future.

About ten years into my recovery, I was introduced to another name for the disease of alcoholism. I heard it described as “the disease of perception”. This expression immediately caught my interest. Why? Because I recognized this was my experience, years after getting sober in AA. My perception of reality was totally warped.

My untreated alcoholism made it extremely difficult for me to see the difference between honesty and dishonesty.

When I became afflicted with the disease of perception, the “true” became “false” and the “false” became “true”.

Rather than serving me, as my illness progressed, my maladapted ego turned against me. I had become my own worst enemy. Dr Silkworth revealed some very important information about my alcoholism. So what have I learned from all the step work I’ve done since coming to AA?

Unquestionably, left untreated, my alcoholic ego makes it very difficult for me to “differentiate the true from the false.” This, in turn, condemns me to be “restless, irritable and discontent.” So it would seem, that Dr Silkworth knew exactly what he was talking about when describing the alcoholic illness.

This eventual surrender and gradual change in attitude did not occur through any personal virtue. I arrived at this Alerted Attitude (AA) by getting the Gift Of Desperation. I admitted that if I wanted to survive, it would be necessary for me to take the good doctors advice. Going through the twelve steps and taking suggestions from a sponsor were the “few simple rules” that Dr Silkworth prescribed.

Can you relate to any of this? If drink was my only problem, I would have stopped needing AA years ago. Instead, after 37 years, I still go to three meetings a week. This is because I still need my sponsor, meetings and the steps to do for me what I was never able to do for myself. They all help me to be honest and gradually learn how to “differentiate the true from the false”. This is the daily reprieve I get when I keep in fit spiritual condition.

“This is how we react so long as we keep in fit spiritual condition.”*

I can only keep in fit spiritual condition by trying to offer love and service to my fellow alcoholics.

“Our very lives as ex-alcoholics* depend on our constant thought of others and how we may help meet their needs.”*

*Quotations used in this blog marked with an asterisk are from the First Edition of the Big Book, which is now in the public domain.